‘The Death of Facebook’… Sounds a little harsh, but as a social media channel Facebook is dying. There I feel better now I’ve said it out loud. There’s plenty to replace it mind you, so if you’re a social media junky you’ll be just fine.

You might think the horrendous data breaches, the court cases in the USA (as well as other parts of the World) and scandalous disinformation would be the top three reasons for the goliath social media platforms downfall. But it’s far simpler than that. Facebook is such a large part of people’s lives it will actually take far more than that to kill off a brand completely. So, what is it…?

The main reason is simply the Facebook generation are using it less. Facebook to a 15-year-old is almost uncool. Unless it’s your local bike or gymnastics club then why would the youth of today use it when their parents use it? It is naturally dying a death.

Having visited two separate school career fairs (October 2018), we conducted some market research with the students. The questions were; “which social media platforms do you use” (aged 14-18). There were no other prompts. Below are the results: 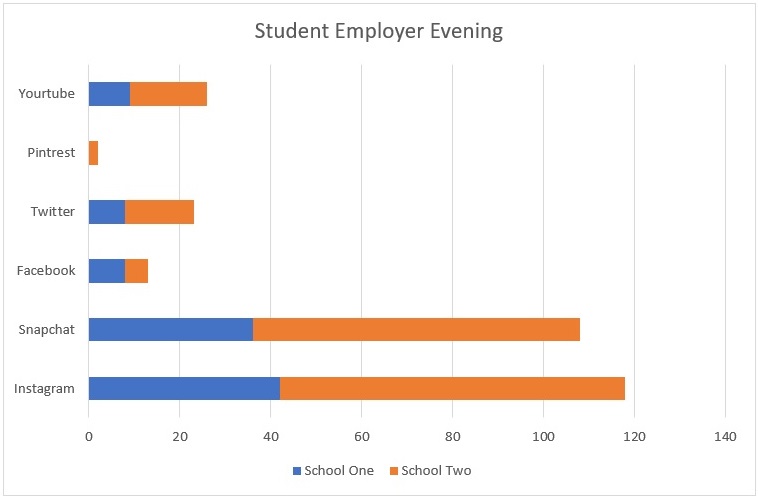 We also asked the students why they don’t use platforms such as Facebook and the top of the reasons were:

Other reasons Facebook has fallen by the wayside is:

Social Media is such a large topic, never-ending and constantly changing. To write an article on Social Media requires discipline as to become side tracked is easily done. However, here’s a little more information you should enjoy reading….

Each era has its giants that sooner or later are replaced by new ‘heroes’.  The Skype and MySpace era began in 2003 and were soon followed by Facebook (2004) and Twitter (2006), which gradually became leaders in the world of social media. Since first launched in 2003, Skype became a very popular instant messaging and video/voice calling service, whilst Myspace became one of the most popular social network sites in history.

MySpace was regarded as ‘the most visited social networking site in the World from 2005 until early 2008. Myspace was still more recognisable in USA than in Europe. However, in April 2008 it was overtaken by Facebook in the number of unique worldwide visitors. Myspace has never come back to its previous level.

Skype another founding revolutionary social media member, still holds significant influence. This is due to the improvements continually implemented and despite the appearing of some strong competitors; such as Google Hangouts, FaceTime and WhatsApp, Skype has stood the test of time.

So… we come to the gladiator of all social media so far – Facebook. The era of story-telling, strange, innovative, different… images and posts that a whole generation grew up with. Even if you are not the kind of a Facebook maniac who checks the profile every second, you definitely have all those Facebook friends that post; their daily food or ‘easy solutions’ for global political problems or crises that the smartest people (are they the smartest?) cannot (or do not want to?) solve for months or years.

The era of Facebook is remarkable, as this social media led to; arrests, convictions, noble initiatives, propaganda, military use and being utilised to influence ‘real life’ at all levels. Like it or not, Facebook has played a part in almost all of a whole generation.

Gradually (as mentioned earlier in this article) Facebook steps aside and is replaced by the likes of Instagram, WhatsApp and Snapchat. Whilst the first 2 are already owned by Facebook, the latter turned down Facebook’s offer for ownership on November 15, 2013, and Google’s offer the next day. The owners of Snapchat are more than happy now as their company is evaluated few times more expensive today!

As WhatsApp and Viber (another platform not owned by Facebook) are considered more an instant message platform, their ‘Social Media’ status is arguable. Anyway, the influence of both of them is strongly high as WhatsApp is used more in USA, Europe and the Middle East. while Viber is used more often Asia and some parts of Eastern Europe. They both offer sending of instant text, image, video messages, as well as voice and video calls. They are arguably both as good as the other, and many use both. Whilst in the UK WhatsApp is definitely used more, in some area of Europe like the Balkan area you might find impossible finding somebody’s number on WhatsApp, just because Viber has many more users.

This is definitely the social media battle nowadays. Snapchat’s more famous amongst the young people. Please see recent research of Statista below: 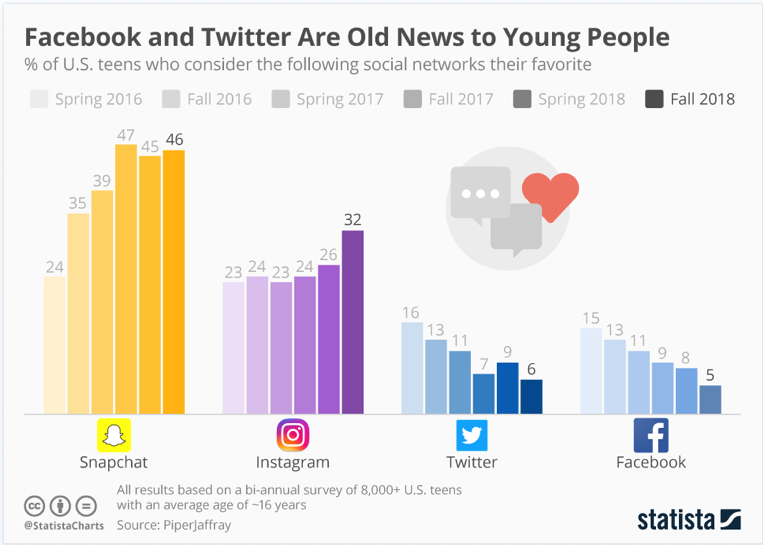 Snapchat & Instagram are the favorite social media platform amongst US teens

Instagram is preferred by a wider age group. The main reason is that Instagram allows you to monetize your presence. You can find thousands of fitness models, life coaches, yoga teachers, etc. that use this platform for profit. It is also the preferred choice for the rich and famous models, actors or sport stars. As this post would probably be missed by Cristiano Ronaldo, David or Victoria Beckham or even Cara Delevingne (shame on them!), we will focus on how ordinary users utilise Instagram.

The Instagram Stalkers/Followers – yes, there’s an actual name for them!

These Stalkers & Followers are users who signed in to follow other people. Yes, there are plenty of people there that show zero activity but follow many celebrities and/or fitness models. Their presence might seem not that important, however it is these that help project and amplify the ‘Instagram Stars’ status!

The second type is The Typical Instagram Social Media user that are using the platform to communicate and mainly ‘be informed’. Informed about news and what’s going on in the life of close and not so close friends. You will definitely recognise them for the Private Accounts or low and usually equal number of Followers and Followings.

It is not hard to recognise the Instagram stars. You will find their accounts public (meaning that anyone can see their posts), with very high activity (especially Instagram stories) and lots of photos to garner interest of their followers. The reason of this type of Instagram users is to reach the highest level of an Instagram user – Instagram Celebrity.

Step in The Instagram Celebrities, who are divided into two groups.

Group One are people who somehow have reached this prestigious level and usually come from being an Instagram Star. Their aim is to monetize their presence online whilst doing something they love, being social. It is not necessary to be famous for this group as it’s largely Instagram that makes you famous. You’ll need to find a way how to show your talent or a great product in appropriate way. Often, some of these users are being sponsored directly by Instagram for high number of followers and post engagements.

Group Two are people who were successful in business before the Instagram revolution and/or through other channels. They use Instagram as another touch point to reach their current followers and gain new followers.

Now…we did mention earlier how easy it is to get side tracked when it comes to Social Media. The social media space is huge, always changing. So back to where we started, Facebook.

What will FB become?

Facebook still has some life in it yet. Those who use Facebook correctly from a business perspective utilize the platform as a replacement for a website. Encapsulating the ‘community feel’. Particularly pertinent for local small businesses from coffee shops to cleaning services and clubs to neighbourly groups. Facebook provides excellent Search Engine (Google & Bing) potential if you’re one of these local Facebook groups.

Our prediction is that people will continue to use Facebook but far less as the years go by and it will eventually become another MySpace unless they address the current trends.